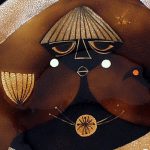 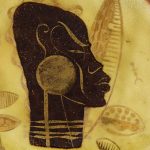 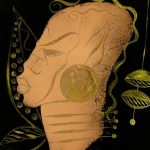 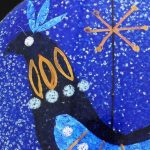 Sterling Hykes was born in Tennessee and moved with his family to Cleveland in the early 1920s. Their journey north was part of what is now referred to as the ‘Great Migration,’ a period during which over 1.6 million African Americans, seeking jobs, economic opportunity, and greater social mobility, moved from the rural South to urban centers in the Midwest such as Cleveland, Chicago, and Detroit, and to the Northeast.  When he was in his teens, Hykes worked as a dishwasher in a restaurant on Cleveland’s then-fashionable Euclid Avenue.  His earnings covered the cost of his school supplies and helped support his family.  As later reported in a 1968 article in the Cleveland Plain Dealer, Hykes’s experience washing dishes strengthened his resolve to continue his schooling and to become an artist.  As he stated, “I never expected to really make it as an artist but I had to try so I could leave the drudgery of dishwashing.  It was a struggle growing up with three brothers and a sister, but well worth it.”  Hykes’s teachers recognized his artistic talents from an early age and, when he was still in the third grade, he was designated the school artist at Giddings Elementary.  He graduated from Cleveland’s Central High School, the oldest publicly funded high school west of the Alleghenies, and in 1941 he enrolled as an evening school student at the Cleveland School of Art, studying metals with Mildred Watkins and enameling with Kenneth Bates.  In 1943 he also studied figure drawing with John Teyral and painting and composition with Carl Gaertner.

A highly versatile artist, Hykes produced work throughout his career in a wide range of media from painting and sculpture to ceramics and enamel on copper jewelry.  Between 1941 and 1957 he frequently submitted work to the Cleveland Museum of Art’s May Show and was regularly featured in the Enameling on Metal, Jewelry, or Sculpture categories.  He also taught art during this period at Karamu House, a widely influential cultural center for Cleveland’s African American community.